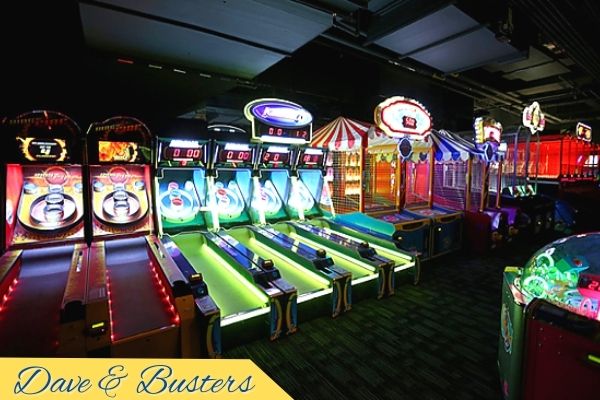 Many times, there have been scenarios when I have heard some bad reviews about Dave and Buster’s because of their combined area for both kids and adults.

It was their USP that both the gaming zone as well as the bar and restaurant were under the same roof. The USP is still very helpful for those who have kids who want to play games while they can eat and chill at a bar. But, the people who have just come to chill with their friends are getting disturbed by the kids present in the bar.

Let’s talk about this and see if it’s a serious problem or not, but firstly, let’s know about Dave and Buster’s.

What is Dave and Buster’s?

Dave and Buster’s is a restaurant company that offers various interests like bars, gaming, and food all under the same roof. It was started in 1982 by David O. Corriveau and James W. “Buster” Corley. The story of this company’s start is in itself a great story. Don’t worry, we will talk about that also.

Both the co-owners, David and James, were running their own individual shops; David was running a game parlor, which attracted a lot of adult customers, and James was running a bar, which served delicious food and friendly service.

Both were having good business, but they noticed that people used to rotate between both the places quite often, and hence they decided to bring both under the same roof, which began the information of Dave and Buster’s.

Dave and Buster’s offerings for kids:

Games always have that attractive force, which lures the kids right towards them. When talking about Dave and Buster’s, it has some amazing games in the store which are hard to resist, even for adults. Some of the games that are available at Dave and Buster’s are carnival-type games, skee ball, driving games, soccer and basketball games, and some video games too.

By mentioning all this, now I also want to visit D & B ASAP and play these games. What about you?

D & B has a Special Menu for Kids:

The new generation doesn’t want the traditional delicious food, they just want to eat junk and enjoy it. Well, that need is also taken care of wonderfully by Dave and Buster’s. They have a special food menu for kids which includes all these delicacies. Some of the food items are wings, burgers, fish, chicken, pasta, steak, etc.

Complains because of Kids:

Usually, there have been no incidents that could have a bad impression on the kids as most of the people who come there are civilized and from good families. But the issue remains that kids are the other name for menace and hence disturb the customers who are there eating or drinking.

There have been many instances of kids’ mischievousness. One of them was when a customer was having a drink and a few kids came towards him running and collided. The drink spilled all over the guy as well as the kid.

This was one of the many instances. Kids are only allowed with their guardians, but guardians are there to chill too, so they let go of the kids, and then the kids start creating problems for other people out there.I think the issue is not that big if the parents become more sensible and take care of the whereabouts of their kids. The store workers should also take care of this issue by handling the kids in a sophisticated manner.

Dave and Buster’s is definitely a place to enjoy your weekend with friends or family. It has all the entertainment sources under one roof, which attracts customers to choose this over others. But the issue of kids creating problems is a problem to be taken care of, and I think it will become better over time.